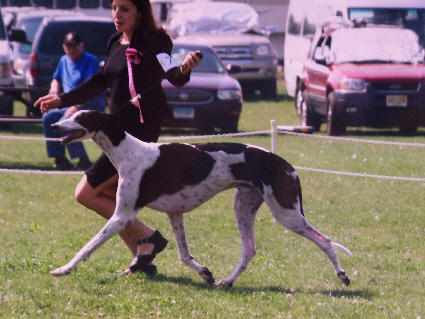 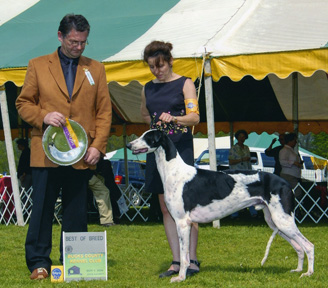 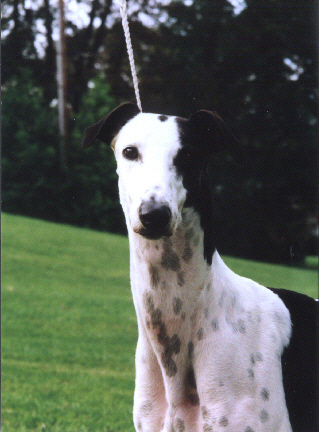 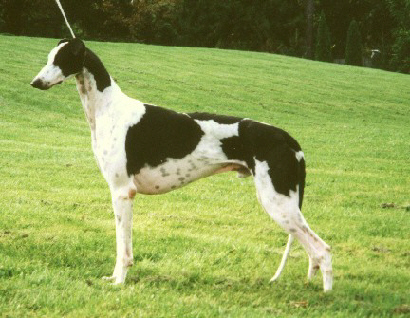 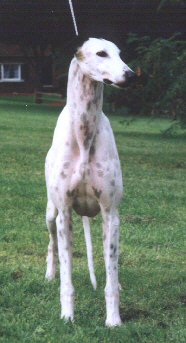 This is K.K. He is out of Swedish Import Ch.Epic Ambassador, JC and Ch. Chesagrey Czarina. He was our first home bred Greyhound champion. He is shown above going Best of Breed at the Bucks County Kennel Club show. We were very proud of this prestigeous win in strong competition. The following day he went Best of Opposite Sex to the winner from Westminster 2004. K.K. was not really shown much but always did well when exhibited. He has always been owner handled.

K.K. has really done well as a producer. Although only 2 of the puppies from his first litter were ever shown with the breeder choosing to sell the others to companion homes, they were all very nice. Out of that litter, his daughter Ch. Rockets Hot Shot went Winners Bitch at the GCA National Specialty in 2007. Litter sister Ch. Honeycomb Just a Girl at SkyHi, SC(aka Gwen)finished her championship easily and enjoyed lure coursing to earn her senior courser title. K.K's second litter was out of Ch. Chesagrey Rocket Cantibile born October 22, 2007. Dogs from this litter that have been shown have done quiet well. 2 of the boys finished their championships at 11 and 12 months of age in very limited showing. His daughter Ch. Chesagrey's Brilliant Rocket, aka Boo, was Reserve Winner at the GCA National Specialty. His son Dual Champion Sky Hi's Delivering the Goods, MC has done well both in the show ring and the lure coursing field. His owner is now going to try Obedience with him. K.K's last litter was out of SBIS BIS Int. Nord. DK Ch. V-05-07 SV-05-07 Epic Clairvoyant, a beautiful bitch in Sweden. 2 of the girls form this litter were exported to the US and finished their championships quite easily. Izzy finished from the 6-9 puppy classes with multiple majors. Sabrina came to the US and finished in a few months time. She was Reserve Winners at the GCA EAstern Specialty and Winners the next day for a huge major. Sabrina was BOS at Westminster February 2011 at under 2 years of age. She is very elegant and a beautiful mover.

K.K. has been very good at passing on his beautiful movement. We are so proud of his ability to produce lovely puppies regardless of what dam he has been put to. His legacy will continue with our latest litter out of his daughter Gwen born July 2011.